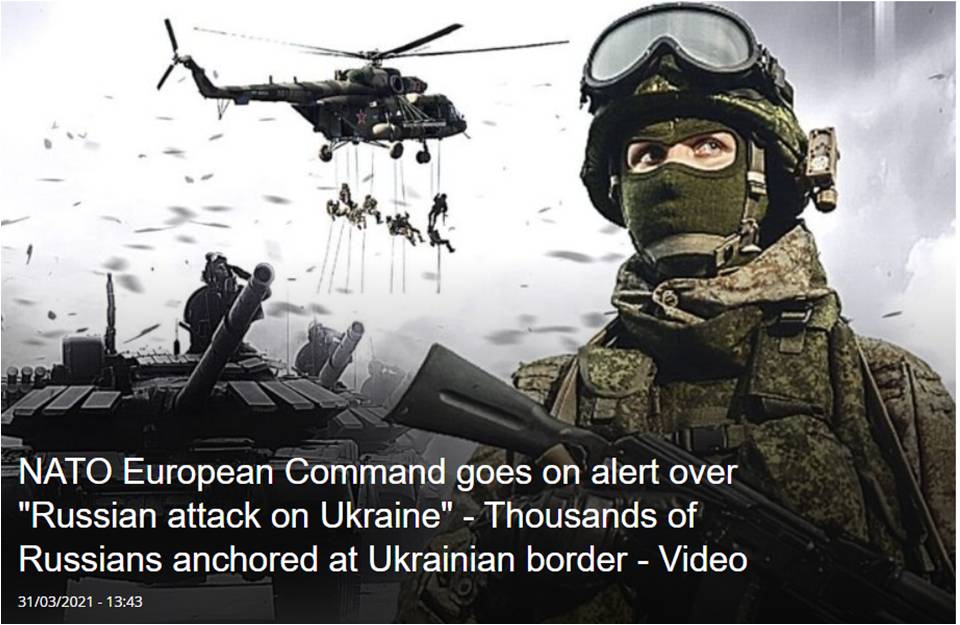 Information confirmed about yesterday’s dramatic developments as NATO’s European Central Command raised the alert level to the highest possible level as it awaits a conflict between Russia and Ukraine.

Russia has transported thousands of troops to the Ukrainian border in the last 24 hours.

We are talking about hundreds of tanks, armor, artillery and two Parachute Divisions.

Read again step by step how we reached the biggest crisis in years at the “door” of Europe. Major news agencies, the so-called “mainstream media”, talk about something more than a possible war after yesterday’s decrees in Kiev.

General Khomchak said Ukraine would significantly increase its forces in Donetsk and Luhansk where “the enemy is likely to strike.”

EUCOM has raised the alert level to the highest possible level due to large Russian military reinforcements, the New York Times reports.

In particular, EYCOM forces are at the level of “possible impending crisis” the highest that exists so far.

The US European Central Command believed that Russia would withdraw its forces from the border with Ukraine. But such a thing did not happen. On the contrary, Russian forces have increased significantly, which indicates impending operations.

U.S. European Command has raised its watch level to its highest level, “Potential Imminent Crisis” due to the deployment of additional Russian troops along the Ukrainian border. U.S. analyst expected the Russian troops to depart after a military exercise, but they did not. – NYT

They report about it

“Conflicts in eastern Ukraine have ended another truce as Russia and Ukraine issued statements on Tuesday (talking about the decrees revealed yesterday by WarNews247).

The war in eastern Ukraine has attracted little international attention so far.

Unfortunately, it has escalated rapidly in recent days, according to statements by Ukrainians and Russians yesterday, Tuesday.

Some time ago, 4 Ukrainian soldiers were killed by an attack by Russian separatists in Donetsk in eastern Ukraine.

For those who don’t know, this isn’t the brigade you want to see on the move.

The 56th Guards Air Assault Brigade is an airborne brigade of the Russian Airborne Troops. The brigade was first formed in 1979 and fought in the Soviet–Afghan War, the 1st & 2nd Chechen War. https://t.co/lAthOpiIvw

“The deaths of the soldiers, along with Russia’s military development on the Ukrainian border, have caught the attention of US officials in the United States and Europe.

That is why the European Central Administration has raised the level of preparedness to the highest possible level that indicates a “possible impending crisis”.

Violent clashes and artillery exchanges in Donetsk were unusual on the last day.

Clashes took place along the entire contact line of about 250 km of ditches and fences. It was probably the biggest conflict of the last 7 years.

The UK welcomes the sanctions by our Canadian 🇨🇦 and Australian 🇦🇺 allies to join the UK in responding to Russia’s construction of the Kerch Bridge – yet another example of Russia violating Ukraine’s sovereignty. We stand united to say #CrimeaIsUkraine

Exchanges of fire are very frequent now and Russian negotiators have warned of the collapse of the peace talks that have been going on for years.

Parliament in Ukraine passed the third draft law on “escalation” at the front and called on Western governments to ” continue and increase international pressure, political and economic, on Russia.”

Looks like #Ukraine has hammered the last nail in the coffin of #MinskAgreements. Very deplorable and very short-sighted move if this analysis is correct…#Donbass https://t.co/LX1OS6OuNW

The failure of the American Generals to predict

This week, General Todd Wolters, the head of the US European Command, raised the alert level for the second time in days as Russian troops did not leave the border with Ukraine.

The U.S. military says a car bomb had exploded at an Iraqi police recruiting center at Kisak, west of Baghdad.

But this did not happen.

#RUSSIA: A citizen recorded this video of a military column in Rostov region near the ukrainian border. He later wrote that he has a bad feeling about it. Filmed on the 25th of march. #Rostov #Ukraine pic.twitter.com/v9FuoJSZ9k

#CRIMEA: A citizen managed to film for a short moment, a train transporting what looks like 2S19 MSTA-S Self-Propelled Howitzers and a BMP in Kerch. Filmed on the 27th of march. #Russia pic.twitter.com/GqpesaBehG

#CRIMEA: Column of armored vehicles on the highway of Simferapol this morning. pic.twitter.com/EKHIUUSlKN

That’s a lot of BMD IFV’s for airborne assault troops near Crimea. I count 31 on this train, video said to be taken 3 days ago. https://t.co/3LQhPM6gx8

#CRIMEA: Train transporting heavy military equipment spotted on the crimean peninsula on the 30th of march 2021. Video via @GirkinGirkin pic.twitter.com/UCLgeaiy9j

Water is the cause of war

Russia has mobilized large paratroopers in Crimea, which many officials say is an invasion.

The goal this time may be to supply water to the Crimea from the Dnieper River.

Putin, Merkel and Macron spoke by phone, discussed the escalation in eastern Ukraine.