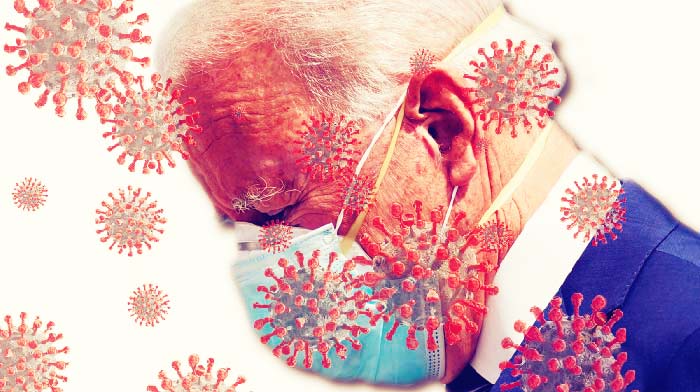 There is a lot of weird stuff going on with Joe Biden’s latest COVID diagnosis… not the first one, this is the second one, although they acted weird with the first one, too. When Joe was first diagnosed his symptoms changed four times. It started out with no symptoms, then he went to mild, then he had a sore throat and body aches, and then he had a respiratory illness, then he was magically cured, and went off on his merry way, only to get struck down by COVID again a couple of days later on July 3oth, and he’s tested positive ever since that day.

He looks and sounds horrid. Like death warmed over.

But regardless, the Handlers have been dressing up Biden like “Weekend at Bernie’s” where he appears to be half dead. And speaking of that, Radar Online is reporting that Joe actually might be suffering a lot more than we realize, and it’s because of a disease he that he has that the White House is not even talking about. Nobody is, actually.

Radar Online reported that Democratic officials in Washington are refusing to speak about President Joe Biden’s biggest health risk. One that could make his recent bout with COVID-19 deadly, Radar has learned.

During the campaign trail, Biden coughed over and over. Eventually, he had to come clean that the cough was due to GERD. That is when acid reflux leads to hacking.

The disease can be little more than an annoyance most times. But today is not most times. The world continues to face the COVD-19 pandemic and people with chronic conditions like GERD face a higher risk of death or severe complications if they catch the virus. Research shows that GERD specifically is a “high risk” condition when it comes to COVID.

But Biden’s doctor and his spokespeople haven’t mentioned a word about Joe’s potential risk involving GERD, even after he tested positive again, and now, can’t seem to kick COVID. There have been recent studies that show a correlation between an increased risk of dying for patients with GERD who contract COVID-19. According to one study out of Australia, GERD led to a 15 percent increase in severe illness or death from COVID compared to patients without acid reflux.

Coronavirus and GERD can have similar symptoms, such as cough and chest pain. The concerning thing is that COVID can cause respiratory illness, and so can GERD, so it’s a double-whammy for Joe, and as we know, he developed a repository illness. It’s very odd that this ailment is part of the public record, yet, nobody is really talking about it right now. And even more odd, is that this ailment is linked to serious bouts with COVID, even death. But our media is still not discussing it. I think any situation where an elderly person is more likely to catch a respiratory illness is very serious; I think when they’re hit with TWO of these illnesses simultaneously, it’s newsworthy, and the fact that Joe can’t get rid of his COVID, despite his 187 vaccines and boosters.

You really have to wonder what’s going on and why nobody is discussing GERD, especially in the media. If it were Trump, it’s all they’d be talking about, and how Mike Pence was about to take over the country — breathless coverage 24/7.

When do we get the results of his cognitive test?