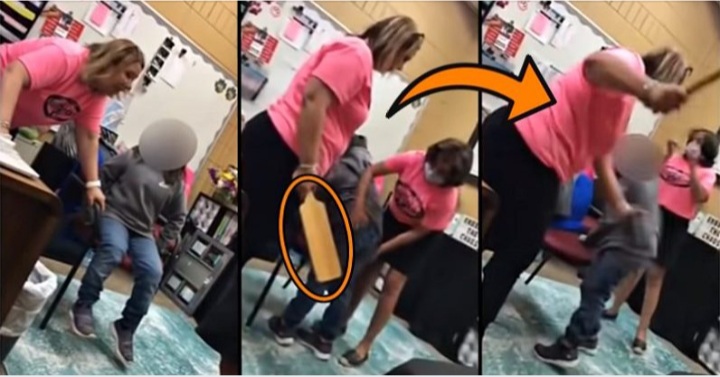 In a leaked video, an elementary school principal and her assistant restrain a 6-year-old girl and deliver a series of heavy blows with a large wooden paddle. After the incident, the little girl’s mother decided to speak out.

When the mother of a young student received a call that her daughter had acted up in class and damaged a computer, the woman was prepared to compensate the school for the repairs. What she didn’t realize was that Central Elementary School Principal Melissa Carter intended to make the child pay as well.

According to WINK News, the unnamed mother was informed over the phone that she would owe the Florida school $50 for the damage her 6-year-old daughter did to a classroom computer. As a native Spanish speaker with little understanding of English, the mother understood that there would be a fine but claims she didn’t comprehend what the school official meant when they mentioned the subject of “paddling.” Although she says she arrived at the school to pay the fee, the woman was ushered into the principal’s office.

The mother was shown a front-row seat to her daughter’s punishment as the little girl sat in a chair flanked by Principal Melissa Carter and school clerk Cecilia Self. As the principal pulled out a heavy wooden paddle and showed it to the child, the mother says she then realized what was about to happen.

The woman, who says she became nervous that were no cameras or police in the room, slid her cell phone from her purse to secretly record the act. The video shows Carter and Self restraining the child and bending her over so that the paddling can begin. “Finally you understand what’s going on,” Self tells the crying child as she positions her before adding, “Put your butt out.”

The mother told the media that she wants “justice” for her daughter but admits she allowed the punishment to take place so that she could expose what goes on in the school. The mother also says she took her daughter to the doctor the same day of the paddling to confirm that bruises and red marks on her buttocks were from the punishment.

Both Carter and Self were placed under investigation, facing serious federal charges. While many Florida counties allow school officials to engage in corporal punishment, Hendry County School district policy forbids it.

It states: “The superintendent shall designate sanctions for the infractions of rules, excluding corporal punishment.” The policy also encourages procedures that “do not demean students” and “do not tend to violate any individual rights constitutionally guaranteed to students.”

Of course, viewers who saw the footage on social media had mixed feelings on the issue of paddling by school officials.

“That is down right disgusting!!!!!!!!! I can’t believe an authority figure did this to this child!!! You just scarred that child for life!!!!! Seriously hope criminal charges are brought forward!!! The child needs a voice!!!!” another wrote.

“Unfathomable violence and cruelty perpetrated by individuals entrusted with the care of vulnerable students. It’s shocking and unnerving,” another wrote.

“This should be done everywhere.. Kids do all types of bad things and there are no consequences. Someone has to discipline these youths.. Parents are letting these kids getaway with everything… I got spanked in School..thank you Ms Ida M. Porter!!! And I got one at home after my Mom got the phone call saying what I have done, Thanks Mom!!! Today I’m a better Man, with respect and morals,” one user wrote.

“Looking at a lot of these comments now you know why our schools are filled with a bunch of ill mannered bats and our street filled with ill mannered rioting brats they want to be held responsible for nothing. No like to them is just one big story of loot and plunder,” another wrote.

Others laid the blame on the mother, who failed to intervene in what she believed to be the abuse of her child.

“If the mother had half a brain in her head she never would have let this happen. Regardless of a language barrier- the paddle is visible and there was more than one swat. You have a voice. Use it,” another wrote.

“If the mother was not okay with it she should’ve intervened…not just recorded it. She’s looking for a lawsuit,” another wrote.

The legality of the punishment is clear: if the school district prohibits its employees from such discipline, the principal and clerk are in the wrong. However, morality is another issue.

Whatever one’s opinion on corporal punishment is, the fact of the matter is that it’s never ideal for the government to be the one doling out the discipline. In most cases, parents should be the ones to correct their own children and not rely on the school or criminal justice system to do so. If this was the standard, our schools wouldn’t be as broken as they are.

These “Truths” Should Intensify Your Longing to Take Back Freedom! Pray! – AWK Must WATCH!

May 5, 2021 Morgan
Thanks for subscribing! Please check your email for our latest news.