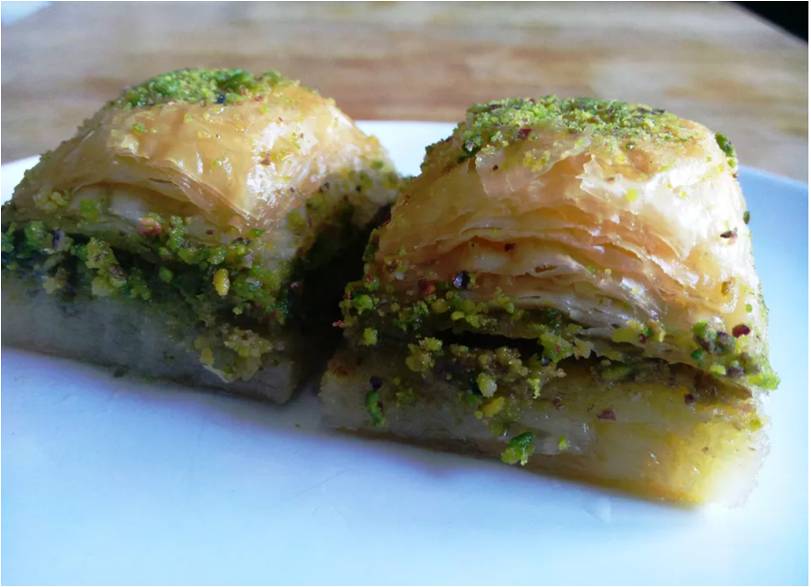 Most baklava fans are familiar with Greek-style baklava which often features honey as the main sweetening ingredient. Turkish baklava is sweetened with “şerbet” (share-BET’), a light syrup made from sugar, water, and lemon juice. This makes Turkish baklava much lighter and crispier than most Greek or Middle Eastern-style varieties.https://6f6f5864ed6fb064f874145125f5eaf6.safeframe.googlesyndication.com/safeframe/1-0-37/html/container.html

In every Turkish pastry shop, supermarket, and household, you’ll find endless varieties of baklava made with walnuts, hazelnuts, pistachios, and more. The sweet treats come in all shapes and sizes like squares, diamonds, rolls, and spirals. It’s a baklava-lovers paradise.

One of the most coveted baklavas of them all is pistachio baklava made with bright green, raw pistachio nuts. If you wish, you can substitute the pistachios with ground walnuts or hazelnuts for a more economical version of this recipe. Go ahead and experiment with different nuts to give you different flavors.

With this recipe, you don’t have to go all the way to Turkey to enjoy good baklava. And you won’t have to roll out paper-thin sheets of “yufka” (yoof-KAH’), or pastry yourself. Baklava is actually very easy to make at home with ready-made, pre-packaged “baklava yufkası” (bahk-lah-VAH’ yoof-kah-SU’), better known as phyllo pastry. You can find phyllo dough in the frozen food section of your grocery store, or in Middle Eastern and Greek grocers. If it’s your first time using fresh or frozen phyllo dough, these tips for using ready phyllo dough are helpful.

The #1 Worst Peanut Butter to Eat, According to a Dietitian