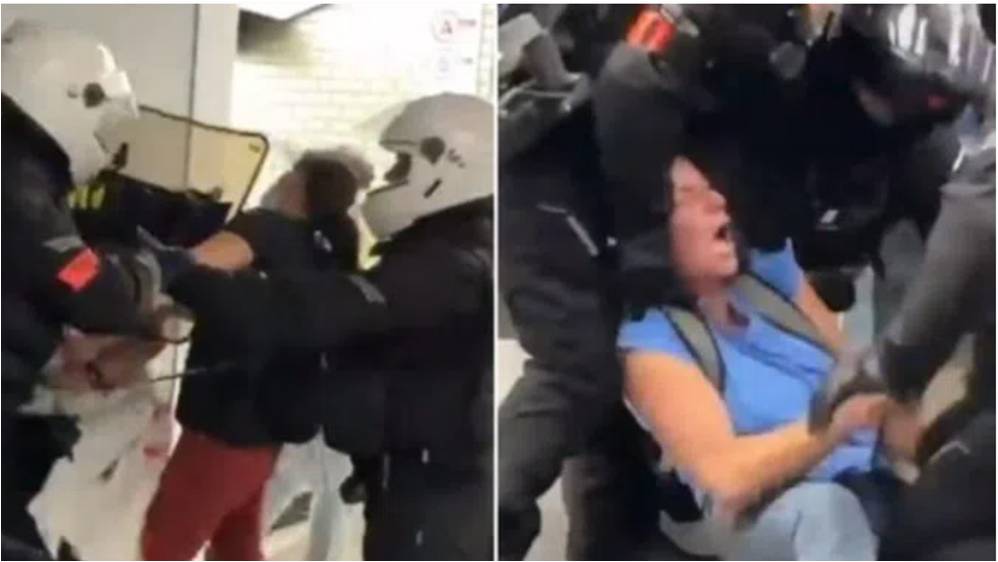 French police, under orders from President Emmanuel Macron, brutally beat a young woman at a shopping mall over the weekend because she was not carrying a vaccine passport.

This is what the ‘liberal’ mainstream media and elite want to see happen in every country around the world.

Hundreds of ordinary French citizens made their way into the Forum des Halles on Saturday. They chanted, ‘Freedom!’, as they held their peaceful demonstration, but were eventually met by authorities.

Bigleaguepolitics.com reports: Eventually, the cops were reportedly forced to leave because the mob refused to follow orders and comply with the jackboots who were enforcing the crackdown against their civil liberties.

Three people were ultimately arrested by cops at the display but otherwise there was no violence from the protesters and the mob eventually dispersed peacefully.

One video is going viral showing cops ganging up on two young women and apparently brutalizing them, demonstrating their total lack of respect for the rights of the people:

While America may be devolving rapidly into a police state, other countries such as France are arguably in even worse shape. Australia seems to be the beta test for the end game that the technocratic globalists want to export all over the West.

Big League Politics has reported about Australia’s descent into Orwellian tyranny, which has resulted in extreme Draconian restrictions against public life even as COVID-19 case totals and deaths remain low:

“Australia is taking lockdown insanity to a new level with members of the Army being employed to enforce stay-at-home orders.

300 unarmed military personnel are stalking the streets of Sydney in order to intimidate the masses and enforce mindless compliance, as the Delta variant of COVID-19 is used as an excuse to continue Draconian lockdown policies.

Reuters even reported the Army is going door-to-door to enforce the Draconian mandates and make sure that those deemed unsafe are confined to their homes, as civil liberties rapidly become a fading notion of the past.

“It’s starting to become clear that the initial lockdown will be insufficient for the outbreak,” Queensland state Deputy Premier Steven Miles said to reporters in Brisbane…

Prime Minister Scott Morrison is using the lockdown tyranny to punish Australian residents so they will feel compelled to accept the vaccine. He says that the lockdown regime will come to a close after 70 percent of the nation’s population above 16 years of age are stuck with the jab. That percentage is at only 19 percent right now…

Deceased globalist oligarch David Rockefeller once said at a U.N. dinner: “We are on the verge of a global transformation. All we need is the right major crisis, and the nations will accept the New World Order.” That time has arrived, and COVID-19 is the right crisis meant to facilitate worldwide submission.

Australia has become ground zero for the development of this satanic agenda that is fulfilling every dark prophecy made by conspiracy theorists for generations. Free individuals will need to make hard decisions about what must be done to prevent this agenda from coming to fruition.”

The resistance in France needs to spread through every corner of the West, or individual freedoms and civil liberties will be destroyed forever by the new scientific dictatorship of the elite.